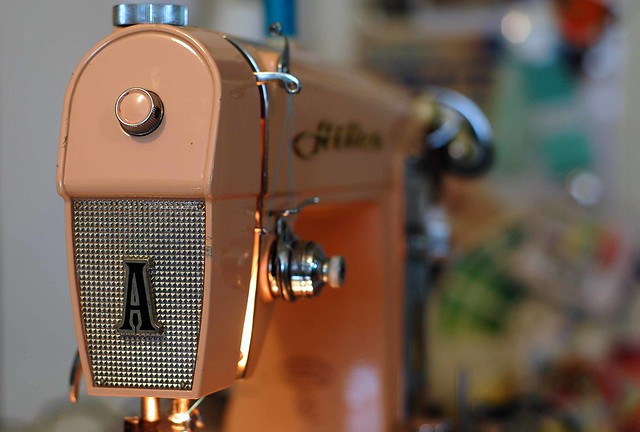 This is the newest addition to the family, a PINK vintage 1950's Atlas Model A-59. I picked her up in Wisconsin on vacation, and she was in pretty sad shape. She was dirty, the presser foot bar was misaligned, the needle was in the wrong way, and the wiring was a nightmare! But you know what? She was only 10 bucks, and for that price if it didn't work, it was going to make a pretty rad decoration in the sewing room! 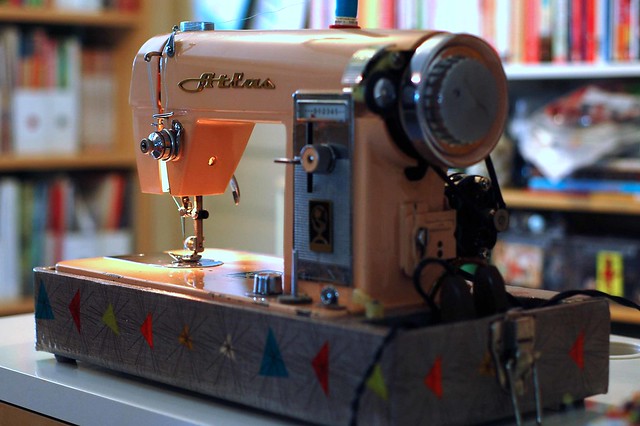 The wiring was so messed up on this baby - wires badly spliced all over the place and old, sticky electrical tape barely holding it all together. We updated the wiring a bit with some left-overs I had from another machine, so now at least it is safe. If I decide to sew with her more, I'll probably look into something even better, just so I don't have this mess of plugs and sockets in the base. 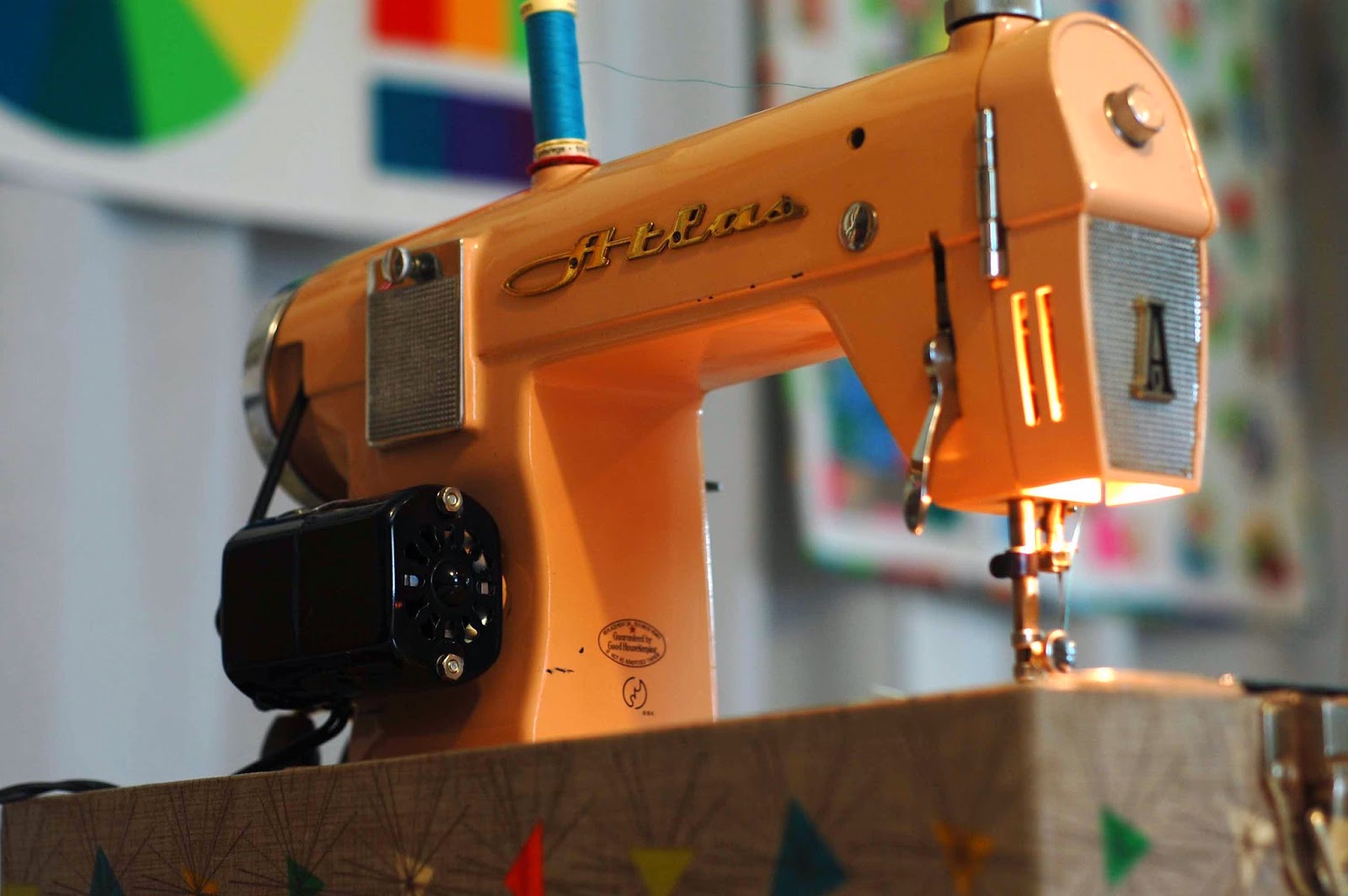 We couldn't get the old motor re-wired, so again I pulled an extra from my scrap parts bin for the old girl. I'll probably end up painting the motor either white or gray, the black just doesn't go with the pink, gold and chrome. 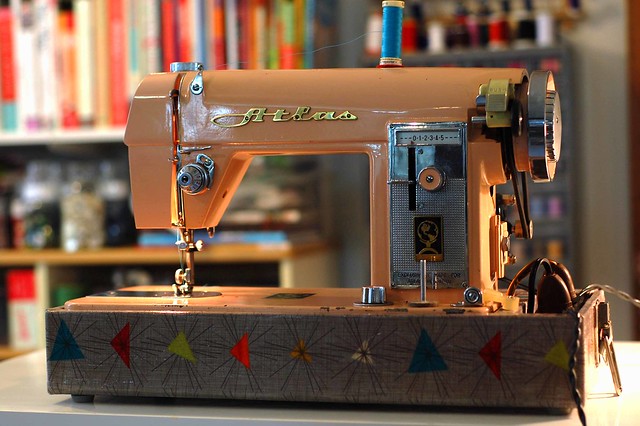 The base is original, but I recovered it with new fabric. It was this old nasty brown stuff that was flaking and pulling off, and it had a ripe mildew smell to it. I peeled off all the old stuff, sanded it down a bit, and used Mod-Podge to apply the new fabric. It's finished off with a hard coat of acrylic clear coat to keep the fabric from ever absorbing moisture and mildewing in the future.

Now for a bit about the Atlas machine itself. This is a straight up Singer 15 clone made in Japan. I've also got a very similar machine in a light blue that is tagged "Brother", and I used to have one other in a pretty turquoise tagged with the name "Morse". I do believe that there were factories in Japan that made all of these machines, and would tag them according to the buyer's instructions. This particular Japanese clone has lots of flair, from the gold-toned tag "Atlas" on both the front and back of the machine to the message stamped in the bottom of the stitch length plate "Exclusively made for Altas in Japan". And there's a black and gold decal in the center of the bed that reads, "Atlas Sewing Centers, Miami, Florida". Now that makes perfect sense doesn't it? Where else would a pink sewing machine come from?

I had a few issues getting a good stitch out of her. The bobbin case in the machine was damaged, so I had to quickly borrow a Singer 15 Class case from another machine to test it out. The stitch width lever works, but the knob to the right is supposed to act as a stopper and indicator, and doesn't work. Despite all of that, she DOES sew! It's what you'd expect from a Singer clone, a little louder and a little clunkier than a classic Singer, and the tension is tricky. Still, she does sew and looks pretty sweet in the sewing room! I think I'll let her stick around, but most likely she'll be displayed on a shelf where I can keep an eye on her!
Email Post
Labels: 15 class atlas clone Erika Mulvenna Japan miss sews-it-all pink sewing machine singer vintage

smazoochie said…
I like to think that I would stop looking at vintage sewing machines with the addition of a pink Atlas & a two-toned Morse. What a great find for $10!
July 21, 2014 at 9:17 PM

Erika Mulvenna said…
Hello Yumagucci, and thanks for visiting my blog! I found some information about the Atlas machines just searching online. They seem to be good machines, and were based on the Singer 15 model. Happy stitching! - Erika
April 18, 2018 at 9:13 AM

Unknown said…
I recently found one identical to yours in my grandma's attic. It works great and is in great condition. Any ideas who would be interested in purchasing one.
February 3, 2020 at 2:15 PM

Unknown said…
Thank you for the info because I found this exact pink Atlas! Unfortunately now I’m searching for pink foot pedal. If y’all have a pink foot pedal in need of a pink machine please reply.
August 11, 2021 at 3:26 PM

Susan said…
I have this exact machine. My problem is it will sew a 3" then will throw a boat load of thread from the bobbin an lock up. Any help you can give me will be appreciated.
August 6, 2022 at 10:21 AM

Erika Mulvenna said…
Hi Susan, sorry to hear about the snafu with your Atlas, that's a bummer! You can troubleshoot by cleaning and oiling the machine, then inserting a fresh needle, making sure that your thread is good, rethreading the whole machine with a freshly wound bobbin. This might do the trick, fingers crossed! - Erika
August 8, 2022 at 10:10 AM 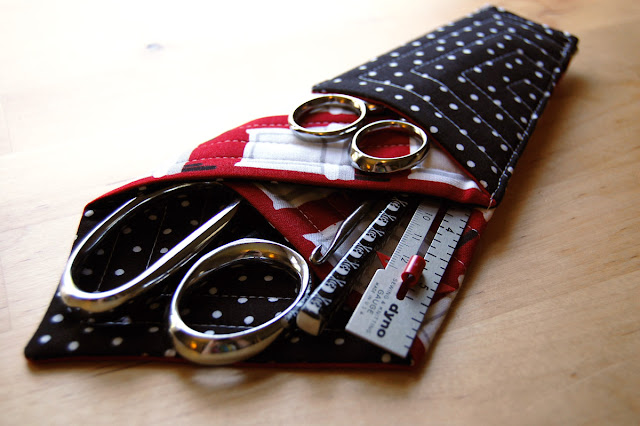