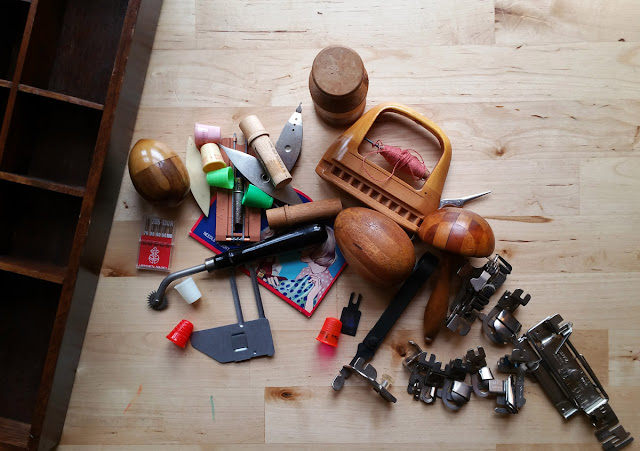 I have a couple of boxes of vintage and just plain old sewing stuff. Orphaned sewing machine feet and accessories, notions, tools, all that kind of stuff. It's been floating around in my sewing room for years, just collecting more junk. So I found a shadow box at a thrift store recently and thought this would be the perfect opportunity to make a home for some of this old sewing stuff. 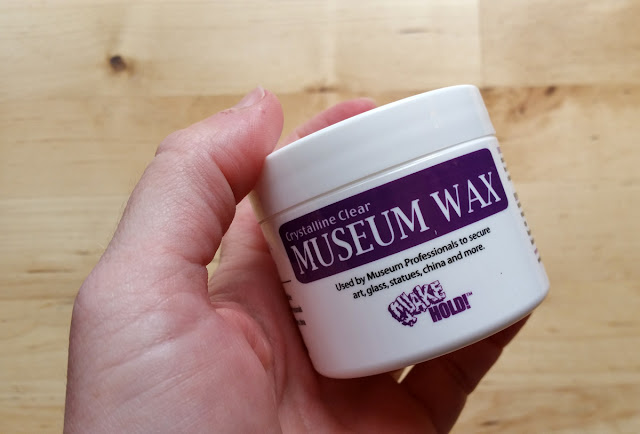 I'm using clear Museum Wax to hold all the small stuff firmly in place within the shadow box. My previous career (before working for BERNINA) was as a Curator and Collections Manager, and we often used Museum Wax to hold small or fragile objects in place for exhibit. It's pretty sticky stuff, and has recently been marketed for use in securing objects in earthquake zones. 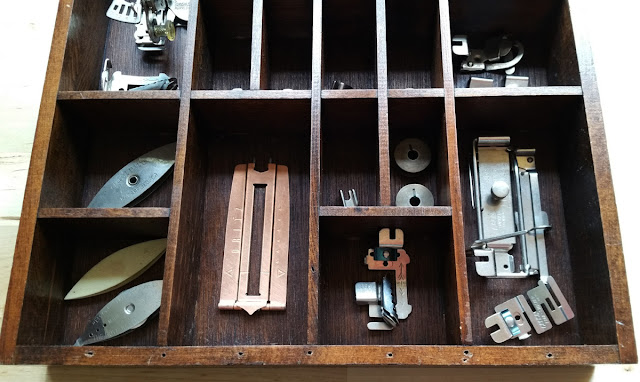 First, I spent some time playing around with the old sewing junk in the shadow box to see how it would best fit. This particular box has a lot of really small compartments, so the vintage sewing machine feet and accessories worked really well. Once I had the old junk all laid out in the box, I set to work securing it all with the Museum Wax. 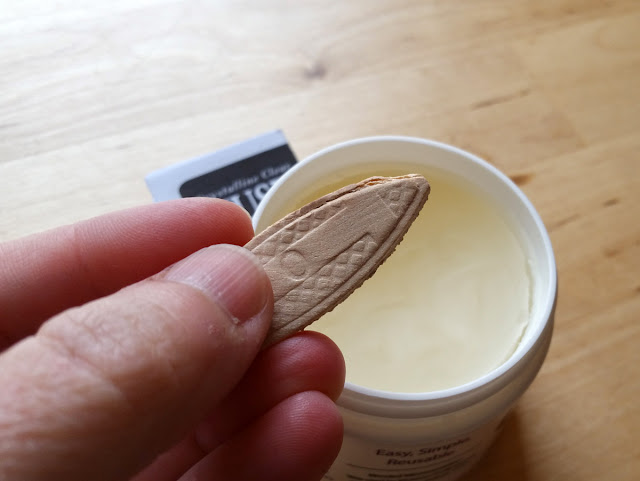 In the jar is a small wooden scraper which is used to dig out a small bit of the wax. It's pretty stiff at first, but as you work it in your hand it becomes soft and pliable. 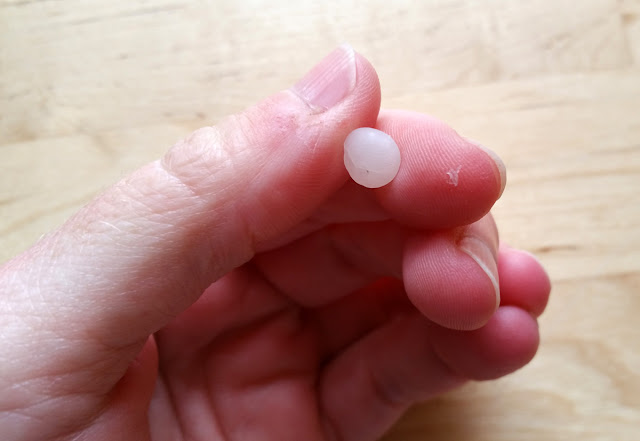 The wax is also soooooooper sticky, and I've gotten in the habit of using only one hand to work with the wax so my other hand stays clean to pick up objects. It's so sticky that it will leave a bit of residue on these metal parts if I accidentally have a bit on my fingers when pushing them down in place. 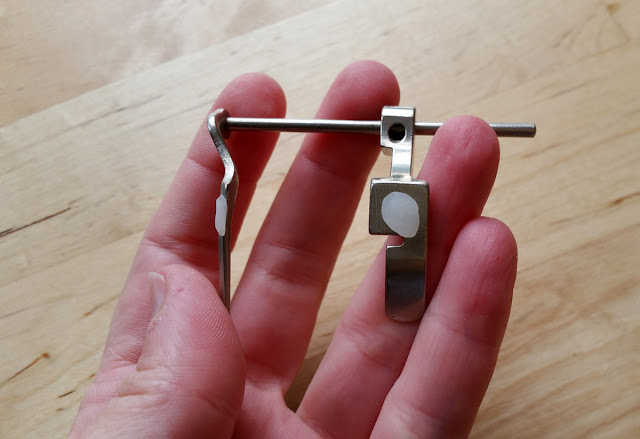 Once I decide where an object will go in the box, I figure out what parts will be touching the box - and this is where I put a few small balls of wax. Then, while the wax is still warm and pliable, I
push the object down in place. 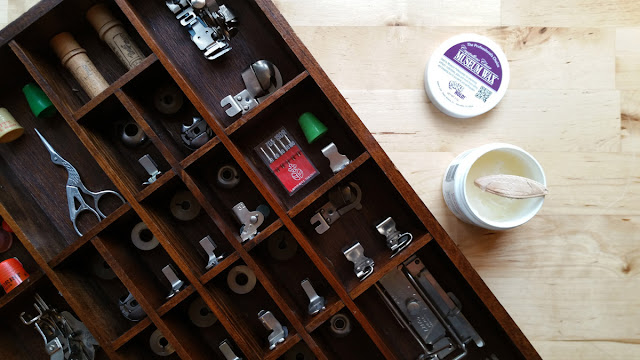 And after an afternoon of carefully securing each little object in it's own special place... 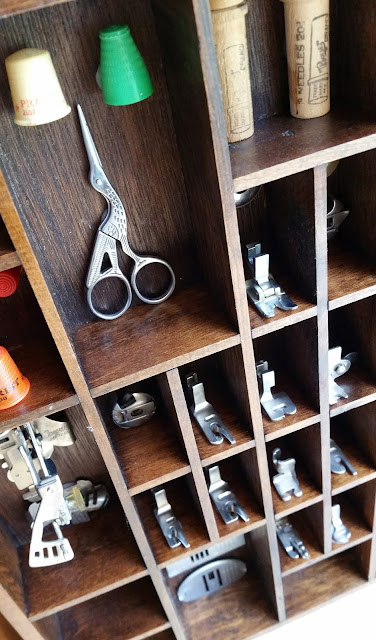 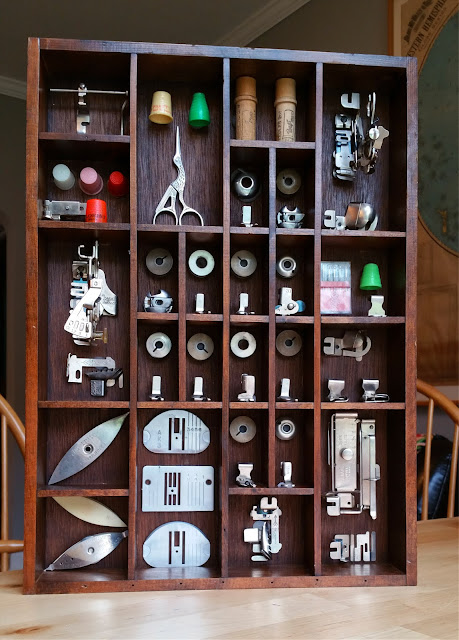 So, not only have I almost emptied out that sewing junk box, I've also got a great new sewing shadow box to hang in the living room (or front room, if you're from Chicago)!
Email Post
Labels: Erika Mulvenna how to use museum wax miss sews-it-all shadow box vintage sewing

Sarah said…
I need to make some shadow boxes with old doll house furniture and have been wondering what to use to hold the pieces in place. Now I know to try museum wax!
August 28, 2015 at 12:57 PM

Exuberantcolor/Wanda S Hanson said…
I haven't heard anyone say "front room" for a long time. I have lived 50-60 miles from Chicago all my life and we always called the living room the front room.
August 28, 2015 at 4:02 PM

Miss Alissa said…
I love it! I have a drawer or two filled with those kind of things. I might have to try that out myself :) Thanks for the inspiration.
August 29, 2015 at 11:22 AM

Jane McLellan said…
Bit disconcerted to see tatting shuttles described as old junk, but otherwise I really like your display.
August 30, 2015 at 3:37 AM

Erika Mulvenna said…
Hi Jane, thanks for visiting! I'm not using the term "junk" as a word meaning worthless garbage, rather as a word to describe stuff that I have collected but don't use. I do realize those are old tatting shuttles, one is made of ivory, and I like them very much. At least this way I can see them on a daily basis instead of having them squirreled away in a drawer.
August 30, 2015 at 5:48 PM

Erika Mulvenna said…
Thanks Janice! Do you display your old sewing "stuff" in any way? I love looking at this collection now that I've put it all together! - Erika
September 28, 2015 at 9:15 AM

Anonymous said…
Just seen your shadow box showcasing your collection - via Ravelry. It's a super idea, lovely!
November 8, 2015 at 10:21 AM

shirley said…
this is a great idea and I hope I will take the time to make one for myself.

Erika Mulvenna said…
Hi shirley, thanks so much! It was a great idea to display all of those little gadgets, feet, and doo-dads that were just sitting around in a drawer. It still hangs in our living room, we love it! Best - Erika
February 13, 2019 at 2:33 PM

Anonymous said…
Just wondering how permanent is the hold of this wax. Would that work for arrowheads?
January 1, 2020 at 10:19 AM

Erika Mulvenna said…
Hi Anonymous, I think you could read more about the Museum Wax and similar products online. The Museum Wax does have a sticky feel and I would only use it with non-porous surfaces. Best of luck!
March 24, 2020 at 2:02 PM